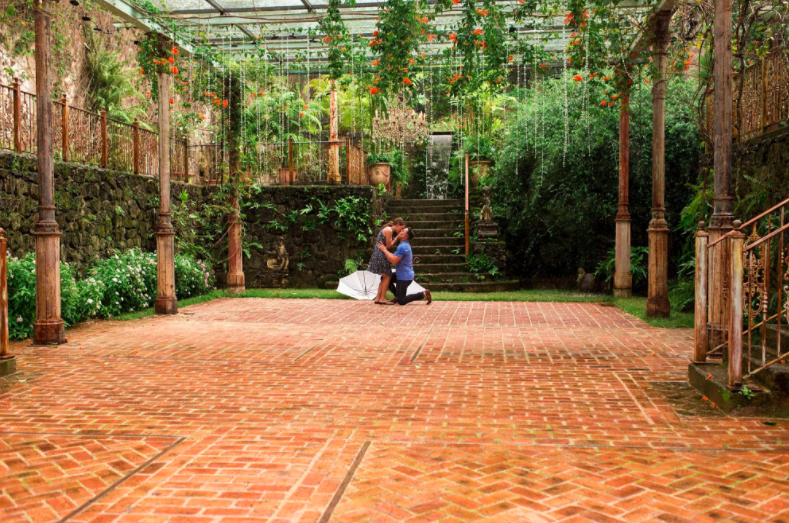 Hello, everyone! I apologize for being a little MIA this past month but it is for good reason. Some of you may have seen on Instagram, but my long term boyfriend proposed during our vacation to Hawaii! Since returning home, between the surprise engagement celebrations, working full time, and my best friend’s wedding, February has come and gone in the blink of an eye! I have so much to share with all of you from my trip. I thought it would be fun to jump back in with a post all about our proposal story and how he asked! But first, a little background story…

Looking back to when I met Ryan, it’s hard to believe it was almost 8 years ago. It was the summer break before I would enter my senior year of high school and I was hanging out with a group of friends at one of their houses. Little did I know, that seemingly ordinary summer day would be one of the most significant days of my life.

Ryan came over with a few others to hang out with all of us. We all lived in the same hometown but went to different schools so I had never met Ryan before. I remember thinking he was cute but didn’t have much interest because he was a year younger than me. I figured, if the guys my age were immature there was no way anyone younger would be any better! Lucky for me, Ryan was persistent and continued to show up every day to hang out with us. It wasn’t long before I fell for him.

Ryan had the perfect opportunity to ask me out on our first date when my best friend left for a month long vacation. The funny part is, he was only 16 and didn’t have a driver’s license yet so I had to pick him up for our date! A few weeks later on September 5, 2009, he asked me to be his girlfriend. We have been together ever since!

Years Leading Up to Now

Roses have always been a special symbol in our relationship. Ryan left a single red rose for me to find on my car after school on our 1 month anniversary (I was a senior in high school). He continued to surprise me with roses each month that added up to the number of months we had been together (2 roses on our 2 month anniversary, 3 on our 3 month anniversary…etc). Each month was a new creative surprise presentation which are some of my favorite memories to look back on. After our 1 year anniversary, I told Ryan he didn’t have to buy me roses anymore because it was going to become too expensive! ?

Now, anytime he buys me flowers there are always roses included. I still have every single rose he ever gave me, dried and stored in boxes. ❤ So aside from loving the definition of “smell the roses”, the phrase definitely has special significance in my life!

We have such an abundance of amazing memories together. Although I like to think we are still just like those young and in love teenagers, we have both grown up so much over the years. We have gotten to experience being high school sweethearts going to prom together, to working our first minimum wage job together, to attending each other’s high school graduations, to graduating college together and watching each other start real adult jobs. We would both not be where we are today without each other’s help. The best thing about us is that we want nothing more than to see the other happy and fulfilled.

How He Asked: The Proposal

Before I tell you exactly how he asked, let me give you a little background info. I have traveled to Hawaii every year since I was a little girl. It has become a second home and is undoubtedly my favorite place in the world. Once Ryan and I began dating, he started coming on these vacations every year and quickly fell in love with Hawaii too. I believe our love grew the strongest during these trips and we are so grateful to have so many beautiful memories there together.

When Ryan started to plan how he was going to propose, the only thing he was certain of was that it would be there. I have to admit, I didn’t think Ryan was going to be able to surprise me. (Spoiler Alert! He proved me SO wrong!)

We were a few days into our vacation on Maui and planning out everything we wanted to do while there. It was our first time on this specific Hawaiian island so we wanted to make the most out it. I had heard of this place called Haiku Mill that was known as one of the most beautiful wedding venues in all of Hawaii. I figured while on Maui, we should go on a tour of the mill so we could see for ourselves just how beautiful it was. Ryan thought it was a great idea and told me he would set it up. In reality, Ryan had already blocked off all of the tours for January 24th so he could pull off a surprise proposal!

The day of the proposal, we spent the morning at a botanical garden and then came back to our room to freshen up before the tour. I was feeling lazy and enjoying being on vacation, so I decided to pull my hair back into a ponytail and go make-up free (if only I had known I was about to take a million pictures.. lol!).

We drove over to the mill and I remember Ryan saying with a big smile on his face that he was “nervous”. I laughed at him because who would be nervous for a tour?! (You would think this would have given it away, but I was still completely clueless!) When we arrived at the mill, it was raining! However, our tour guide, Shelby, was waiting for us with beautiful white umbrellas. Haiku Mill was breathtaking even in the rain. It’s hard to put it into words but it I felt like we were taken back in time to an enchanted tropical forest.

Shelby led us around the property, including under a 100-year-old giant mango tree, until we got to the ruins of the historic mill. Ryan held my hand as we walked through the doorway until we stopped under a crystal chandelier hanging from the mill’s glass ceiling.

Shelby told us she would be right back because she was going to go turn on the chandelier. I was looking around in awe when Ryan took my umbrella from me and set it down. He held both my hands and said, “I have to let you in on a little secret. We are not here for a tour”. I immediately knew what was happening but couldn’t believe it. Next thing I knew, Ryan was down on one knee and asking me to marry him. I started crying the happiest tears I ever had and said, “yes, yes, of course!” I had never been so surprised in my life.

Seconds later, our photographer, Angie, and videographer, Caleb, came out of hiding with a beautiful bouquet of red roses mixed with local tuberose (he couldn’t forget my roses!). Ryan told me they had documented the whole proposal and that we were now going to take photos all around the mill and then off-site at the beach. Throughout the photo session, I had to stop for a minute because I kept crying! I thought I couldn’t love Ryan more than I already did but what he did to surprise me made me fall for him all over again. It was a truly magical day.

There are several people I have to thank for making this day so spectacular.

First and foremost, thank you so much to Angie Nelson for helping Ryan plan the most beautiful proposal I could have ever asked for. Thank you for coaching me through the entire photo session since I could barely think for myself considering I was still in shock/crying. The pictures are absolutely stunning and I will cherish them forever!

Another big thank you to Shelby Carlson from Elements Luxury Events for coordinating the proposal at Haiku Mill! Thank you for ensuring everything ran smoothly and for playing along as our tour guide.

Thank you Caleb McLellan from Areca Film Company for capturing our proposal on film! I am so grateful to have this video to look back on in future years.

Thank you Lauren B Jewelry for making me the ring of my dreams.

Finally, thank you Kahului Florist for providing my lovely bouquet of roses and tuberose!

I hope you have enjoyed our story! Thank you for reading <3

find me on social media

What are you searching for?